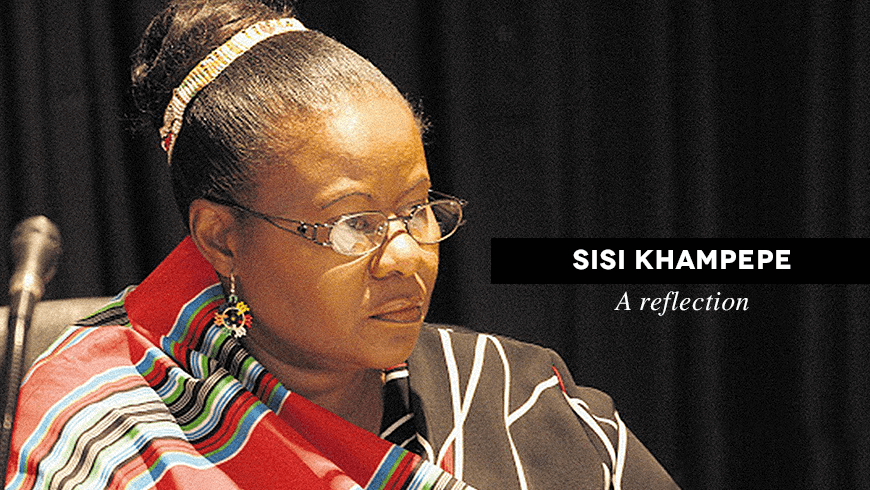 I first met Justice Sisi Khampepe in August 2014 at my interview for a position as her law clerk.  At the time, I was a 22-year-old fresh from university and wholly inexperienced.  This interview was an important moment for me.  I had spent my December holidays going to the Constitutional Court and sitting-in on hearings.  Never did I ever imagine that I would get the opportunity to sit down, one-on-one, with one of its Judges.

In preparation for the interview, I read and studied all the judgments Justice Khampepe had written at the Constitutional Court, and all of her seminal judgments in the High Court and Labour Appeal Court. I had anticipated that I would be put through my paces about my knowledge of the law and the Court’s jurisprudence—after all, this was a job interview for a clerkship at the highest court in the land.

I could not have been more wrong.  Judge Sisi Khampepe, or “SK” as we affectionately called her, was not interested in towering over me with her knowledge of the law.  Judge was only interested in who I was as a person, my life’s story, my dreams, and ambitions.  I later came to learn, in the time I spent at the Court as her clerk, that this is who SK is – despite her many successes and accomplishments, SK is always more interested in the things that define who we are.  Anyone who has had the pleasure of meeting her will tell you about her incredibly warm and inviting spirit.

…despite her many successes and accomplishments, SK is always more interested in the things that define who we are.

When sitting on the bench, Judge wears a very solemn and stern face.  However, what few know about her is that she was indubitably one of the funniest amongst her peers.  Her humour was rivaled by none other than her room-filling laughter.  Often as clerks, we would joke that we knew Judges’ Conference was over when we heard SK’s laugh fill the corridors of the Court.

Though Judge Khampepe may be small in stature, she stands tall as a bastion of the best that our country has to offer and a great ambassador of what it truly means to swear an oath to be faithful to the Republic, to uphold and protect the Constitution, and to administer justice to all people without fear, favour, or prejudice.  At a time when the very fabric of our constitutional project was tested, she did not shirk in her commitment to the rule of law and in upholding the supremacy of the Constitution.  Few would have handled that kind of pressure with the grace and humility that she did.  It is, indeed, “the lofty and lonely work of the Judiciary, impervious to public commentary and political rhetoric, to uphold, protect and apply the Constitution and the law at any and all costs.”[1]

…she stands tall as a bastion of the best that our country has to offer and a great ambassador of what it truly means to swear an oath to be faithful to the Republic, to uphold and protect the Constitution, and to administer justice to all people without fear, favour, or prejudice.

Judge Khampepe – The unassuming captain of the ship

Though never Chief Justice in name, I witnessed first-hand how she quietly, and without expectation of fanfare or self-ingratiation, steered the ship at the Court.  In Sesotho, it is often said that mosadi o tshwara thipa ka bohaleng ( loosely: “a woman holds the sharp end of the knife”).

Judge Khampepe’s legacy is well documented in the many judgments she has written.  Many are worthy of mentioning, however, there is a recent judgment she wrote which will reverberate into the future in how our courts dispense of justice.  In Ntuli, she wrote:

“Rape, at its core, is an abuse of power expressed in a sexual way.  It is characterised with power on one side and disempowerment and degradation on the other…

The notion that rape is committed by sexually deviant monsters with no self-control is misplaced.  Law databases are replete with cases that contradict this notion.  Often, those who rape are fathers, brothers, uncles, husbands, lovers, mentors, bosses, and colleagues.  We commune with them.  We share stories and coffee with them.  We jog with them.  We work with them.  They are ordinary people, who lead normal lives.  Terming rapists as monsters and degenerates tends to normalise the incidents of rape committed by men we know because they are not “monsters” – they are rational and well-respected men in the community.  Yes, the abominable behaviour of these men is abhorrent and grotesque and the recognition that they are human does not seek to evoke sympathy – it serves to signify a switch from characterising rapists as out-of-control monsters and centres the notion that rapists are humans who choose to abuse their power.  The idea that rape is committed by monsters and animals may have adverse effects in that it may lead to the reinforcement of rape myths and stereotypes.  For instance, labelling of this nature may lead to a cognitive dissonance when the actual rapist does not match the description of rapists.  It has been said that this cognitive dissonance leads to the problematic questions like “person X is a good man, what happened to cause him to rape?”  These questions have the effect of then centering the actions of the victims and not those of the actual rapist.  This in turn reinforces the prevalent rape culture in South Africa and safeguards the patriarchal norms which normalise incidents of rape.” [2]

May her words ring loudly and clear in the ears of those called to dispense justice!

Though she may have now retired from the Court, she has carved a pathway for many to follow in her footsteps.  I have personally benefited immensely from the personal investment she made into my dreams and ambitions.  I, like many others, stand on the shoulders of giants- SK is chief amongst them.

Undoubtedly, Sisi Khampepe will go down in history as one of the most consequential Judges in our nation’s history.  I feel immensely privileged to have been able to witness her greatness.

Tshidiso Ramogale is a practising advocate the Johannesburg Bar and a member of the Pan African Bar Association of South Africa. He was  law clerk to Justice Sisi Khampepe in 2016/17.

[1] Secretary of the Judicial Commission of Inquiry into Allegations of State Capture, Corruption and Fraud in the Public Sector including Organs of State v Zuma and Others 2021 (5) SA 327 (CC) at para 1.