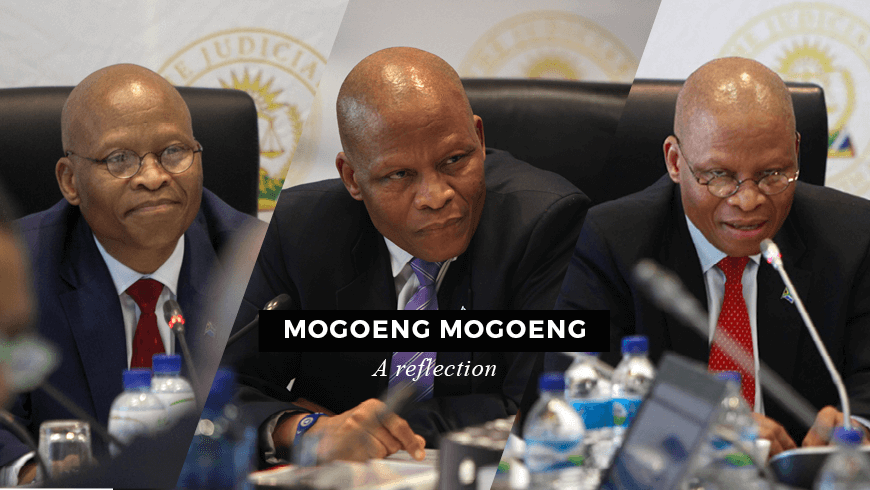 In 2009, the last of the first group of judges of the Constitutional Court retired, and were replaced by Justices Froneman, Jafta, Khampepe and Mogoeng. These four judges have now retired from the court by the end of 2021. To mark this occasion, we have asked former clerks to share personal reflections of what it was like to work for the judges. The first of this series paid tribute to Justice Johan Froneman, who retired from the court on 31 May 2020. The second of these series pays tribute to the outgoing Chief Justice, Mogoeng Mogoeng, whose tenure ended on 11 October 2021.

Chief Justice Mogoeng Mogoeng is the best boss I have had thus far in my career. His humility and unpretentious approach changed the way I would see my role not only as a researcher in the apex court, but in the legal profession as a whole. He demonstrated that it does not matter what your position or station is in life, you should treat everyone with dignity and respect.

Arriving at the Constitutional Court in July 2015, I was awestruck by the prospect of working with people whose work I had read about and even been examined on as a student and relied on as a young professional.

I cannot fully explain what my expectations were, but I remember being nervous and anxious about my first meeting with the Chief Justice. Nothing in my academic years or my time as a candidate attorney could have prepared me for the journey that I was about to embark on.

To say that working for the head of the judiciary was intimidating is an understatement. However, when I finally got to engage with him and work with him, I found all the anxiety I had completely disappeared. All the insecurities I had about my abilities as a legal practitioner were chipped away. We worked hard, very hard. There were long days and nights of research and engagement on points of law in preparation for hearings and judgments. However, through it all, we learned and we grew in our understanding of the law.

The Chief Justice’s passion for and commitment to transformation of the legal profession, society and his promotion of ethical leadership was something that I was particularly impressed by throughout my time at the court. He was not shy to say that which was needed in order to stir a desire for change and introspection amongst his listeners, and I found this to be quite inspirational. What was even more impressive to me was the respectful manner in which he engaged in topics that were often quite divisive.

As a black woman in the legal profession, when I started my career, there were very few black lawyers that I had been exposed to, whom I could emulate, let alone at such a senior level of the profession. So for me, working for a black lawyer, who held such a senior position of authority in this profession was a true blessing and revelation.

As a black woman in the legal profession, when I started my career, there were very few black lawyers that I had been exposed to, whom I could emulate, let alone at such a senior level of the profession. So for me, working for a black lawyer, who held such a senior position of authority in this profession was a true blessing and revelation. Despite the myriad of challenges thrown in his direction, I admired how he never let that detract him from the task at hand. He showed up every day, and made immeasurable contributions to our Constitutional jurisprudence and the legal profession as a whole. It made me realise that there are no limits to what I can achieve, despite the challenges and obstacles faced by so many black legal practitioners.

In my time at the Court, I learned that respect for the law is paramount and that regardless of one’s personal feelings, a good lawyer knows how to separate their personal views from the cases they are seized with, for the good of those who seek justice before the courts. It was this experience at the apex court under the guidance and leadership of the Chief Justice that I began to imagine the kind of lawyer I wanted to be and sought to emulate what I had been taught in my own practice and my own sphere of influence.

What impressed me the most while at the court was the respect and collegiality displayed by all the Justices towards each other. Despite each of them being astute legal minds in their own right, it was impressive to see the level of respect they each showed for each other. For Chief Justice Mogoeng, that respect and collegiality did not just end with the Justices, as he displayed the same level of respect for our opinions as his researchers. While I was his researcher, I never felt as though what I said was unworthy of engagement. This obviously encouraged me to ensure that when we did meet with Judge, I had my ducks in a row and had done the necessary preparation to make sure my contributions to the engagement on judgments is worthwhile and meaningful.

I started off as an insecure fledgling legal practitioner and left that august institution as a confident and bold lawyer. I looked forward to our chamber meetings with Judge because I saw these as an opportunity to not only refine my skills, but to learn from a great leader. Very few legal practitioners will have the chance to be mentored by a Chief Justice. The fact that I count him as my greatest mentor, is of immeasurable value to me. Had it not been for the affirmations of this great legal mind in my abilities as a lawyer and the validity of my opinions, there is no telling where I would be today. It is for that reason that I wish to thank you Judge for the very gentle manner in which you taught not only me, but many others who have come before and after me, what it means to be a principled lawyer and I can only hope that I carry and put into practice what I learned from you, throughout my career. I wish you nothing but the best in your new phase of life and career.

Princess Ka-Siboto is a human rights Attorney and acting Head of Legal Services at the South African Human Rights Commission.