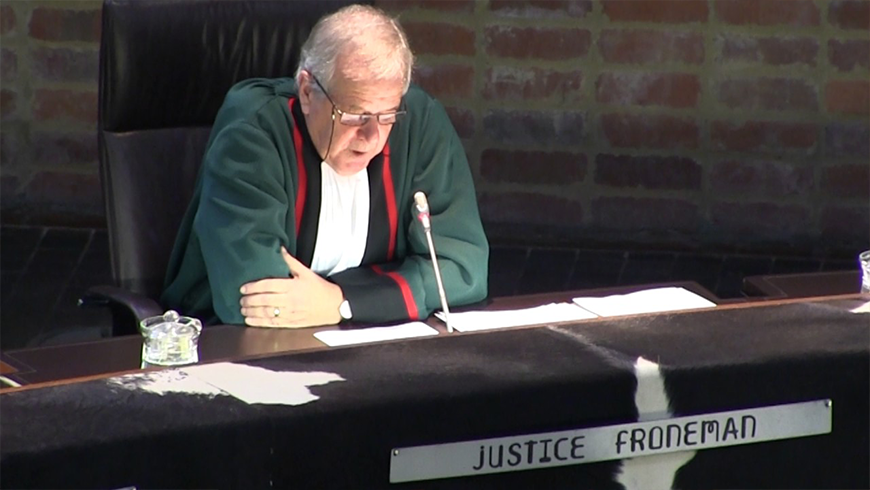 JF – the Man, the Judge, the Legend by Kate Loughran

In 2009, the last of the first group of judges of the Constitutional Court retired, and were replaced by Justices Froneman, Jafta, Khampepe and Mogoeng. These four judges are due to retire from the court by the end of 2021. To mark this occasion, we have asked former clerks to share personal reflections of what it was like to work for the judges. The first of this series pays tribute to Justice Johan Froneman, who retired from the court on 31 May 2020.

Working as a law clerk for Justice Froneman

Moving to Johannesburg – a city everybody told me to avoid – turned out to be the most exciting, draining, and inspiring six months, full of stimulating debates, vanilla coffee and rooftop workout sessions. But working as a law clerk for Justice Froneman was the most rewarding part. Being able to be part of daily discussions about such wide-ranging Constitutional issues far surpassed any expectations I had before arriving.

“Despite the transformative period South Africa has undergone and continues to undergo, arriving at the Court as a foreign clerk was a stark reminder of the sheer myriad of practical challenges such an advanced Constitution has thrust upon society.”

Despite the transformative period South Africa has undergone and continues to undergo, arriving at the Court as a foreign clerk was a stark reminder of the sheer myriad of practical challenges such an advanced Constitution has thrust upon society.  Objective standards of law and ‘reasonableness’ take a whole new form and it was both challenging and exciting to step outside the boundaries of what is conceivable within my relatively small society in Northern Ireland. I have learned to think and analyse issues in a more carefully considered way as a result.

In such a turbulent year (2020), it feels like a devastating blow to have Justice Froneman step down from the bench. But leaving a legacy of 26 years of incredible legal jurisprudence and wisdom cannot be something to be upset over.

And of course, he stepped down during lockdown to avoid the fuss of his retirement party.

For me, Judge was one of the most inspirational figures I have come across in my life, teaching me the importance of the integrity of Judges and their role in upholding the Constitution.  Cheeky jokes and a mischievous sense of humour were never far behind interactions with Judge and I still think that he used to enjoy tying my brain in knots.

He would stroll past the door in the late afternoon imploring his clerks not to stay too late and to rest, while simultaneously deciding to participate in several new workloads while me and my colleagues exchanged exasperated glances. (In our defence, 2016 remains the busiest year on record at the Court.)

In my experience of my time with Judge it struck me that he has never shied away from the uncomfortable realities and questions that he faced, tackling difficult issues head on, when others perhaps with less integrity would shy away. An important lesson that I try to learn from.

Justice Froneman recognised and embraced the Constitutional ethos of judicial decision making at the dawn of the Constitution while in the High Court. He was a judge at the forefront of a new legal era in South Africa and crafted new law and jurisprudence that will remain a bedrock of legal principles in the future. Witnessing his systemic approach and methodical breakdown of issues post-hearing was fascinating. I learned a lot about the importance of the integrity of Judges and their role in upholding the Constitution. The case load itself was immense and the scale of research within the time constraints was demanding, but well worth the time and energy exerted writing our judgments while dissecting and discussing every paragraph and comma! I learnt about South African law at an incredible pace and had the chance to be a part of some very exciting jurisprudential history. The last few cases we decided grappled with how to reconcile the previous era of hugely rapid transformative change at the beginnings of the Court, with evolving areas of law in a manner which will be long-lasting yet fluid, in order to enable rather than hinder progression. It has provided me with the professional experience of a lifetime and the chance to literally make and shape Constitutional jurisprudence and history in such an exhilarating country. The weight and gravity of each and every decision was both sobering and motivating at the same time.

There is no worry of so-called dissent aversion with Justice Froneman, who authored respectful and well principled dissenting opinions so often in many judgments, frequently without the intellectual support of fellow Judges, showing his integrity and freedom from external influences – of which much more can be said and is one area that I am sure will necessitate in-depth study in the future. Judge in his own writing recognised the role that substantive legal reasoning has in Constitutional jurisprudence, dealing not only with formalistic legal concepts, but emotional issues of culture, religion and language.

Justice Froneman exhibits an intellectual approach in understanding the continuous dialogue between the branches of power: executive, legislature and judiciary, through eloquent writing. He has an immense, amazing stamina for writing and on more than one occasion Judge’s written draft would circulate before we had time to even collate our thoughts. 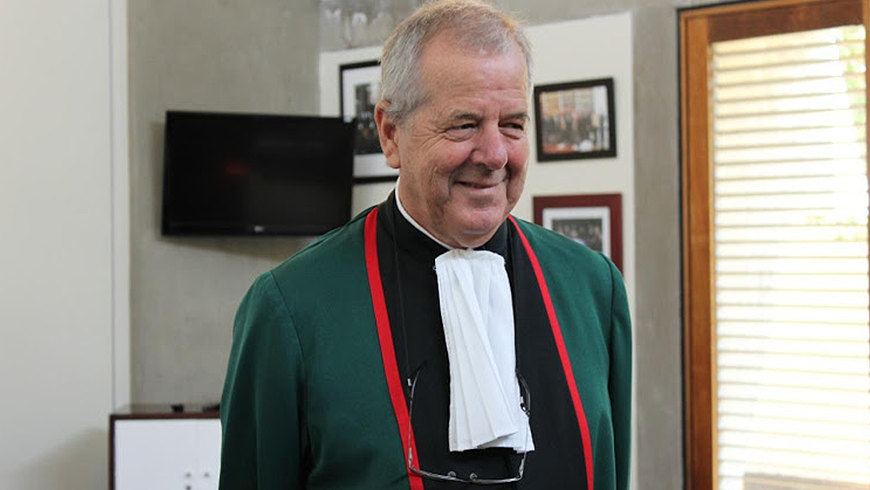 Image credit: The Office of the Chief Justice

I came to South Africa having studied the Constitution and legal theory behind the democratic transition and while the legal landscape in South Africa is far from ideal, Justice Froneman and others of his rank leave me optimistic that there are those still working for “a future founded on the recognition of human rights, democracy and peaceful co-existence and development opportunities for all South Africans, irrespective of colour, race, class, belief or sex”.[3] The importance of judges of Justice Froneman’s calibre in this Constitutional dispensation cannot be underestimated. He will be sorely missed. We can only hope that he will continue to pass on his wisdom through his writings and works.

I am tempted to go on, but as Judge once wrote I think I will just let it go at that.

Kate Loughran is from Northern Ireland. An LLM graduate in International Human Rights Law and Transitional Justice, she clerked for Justice Froneman in 2016 at the Constitutional Court of South Africa. Kate is now a trainee solicitor with a leading commercial law firm in Belfast, Northern Ireland.