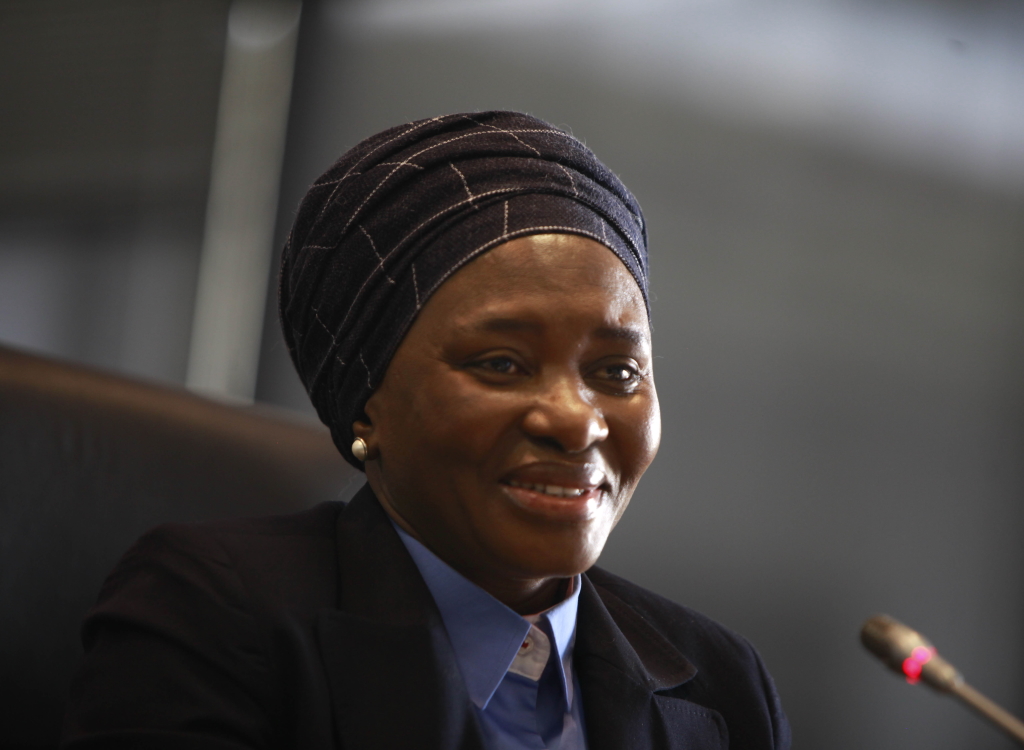 Gauteng High Court Judge Nana Makhubele is facing a misconduct investigation by the Judicial Conduct Tribunal which could lead to her impeachment. The investigation arises out of a complaint filed by civil society organisation #Unitebehind, which alleges that Makhubele violated the separation of powers principle by being both a judge and chair of a state-owned company and advancing corruption and state capture.

The judicial conduct tribunal hearing scheduled for 10 and 11 January 2022, has been postponed to a later date that is yet to be confirmed.

WHO IS JUDGE NANA MAKHUBELE?

Judge Nana Makhubele was brilliant at school. She skipped certain grades and, in one year, completed three of them simultaneously. Due to her meteoric rise through primary school, she was set to enter secondary school at the same time as her elder brother, however, her parents were unable to pay for both children to attend high school and so Makhubele worked for a year as a cleaner. After returning to school, she completed her education and went on to become a social worker. She joined the bar as an advocate in 1999 after working as a public prosecutor in Giyani and as Assistant Master of the High Court in Pretoria.

Then Advocate Nana Makhubele SC was a trailblazer, rising through the ranks as a practising advocate and eventually taking silk (senior counsel status). She later become the first black female chairperson of the Pretoria Bar Council.

Her appointment as a judge was widely celebrated.

BACKGROUND: A HISTORY OF CONTROVERSIES

PROCEEDINGS AT THE JUDICIAL CONDUCT COMMITTEE

#UniteBehind filed its complaint against Judge Makhubele in January 2019. Over a year later, in March 2020, the complaint was referred to the Judicial Conduct Committee. The JCC held a private hearing where both #UniteBehind and Judge Makhubele were given the opportunity to make representations and legal arguments. After this hearing, Chief Justice Mogoeng Mogoeng (joined by fellow JCC members Judge Dumisani Zondi and Judge Nambitha Dambuza) handed down a written decision in which he found that #UniteBehind had established a prima facie case of gross misconduct against Judge Makhubele which might lead to her impeachment. CJ Mogoeng recommended that the JSC establish a Judicial Conduct Tribunal to investigate the complaint against Makhubele.

In October 2020 The Judicial Service Commission (JSC) met to decide on the JCC’s decision in the Makhubele complaint.  After having considered the complaint, the submissions made by all the parties and the Judicial Conduct Committee’s recommendation, the JSC decided that a tribunal — which looks into potentially impeachable conduct — was warranted and should be appointed..

In a media statement, the JSC also indicated that it would also advise the President that “it would be desirable” to suspend Makhubele pending the finalisation of the complaint.

In early November 2020 Makhubele submitted an urgent application in the North Gauteng high court to set aside the Judicial Service Commission’s (JSC’s) recommendation to President Cyril Ramaphosa that she be suspended from her duties. Her application claimed that the JSC lacked the jurisdiction to discipline her. Her papers also cited commuter activist group #UniteBehind as a respondent. It was #UniteBehind’s complaint to the JSC that led to her suspension. Makhubele also wanted the court to declare that the state should pay for legal costs. Makhubele later withdrew her application after the JSC filed a notice of counterapplication which asked the court if her application was successful, to set aside her appointment as a judge, and to bar her from performing any judicial functions or practise as an advocate.

The  Tribunal has now confirmed that the date for Judge Makhubele’s Tribunal is scheduled for 10 and 11 January 2022, exactly three years since the complaint was filed.

WHAT IS JUDGE MAKHUBELE’S TRIBUNAL ABOUT?

Judge Makhubele faces charges of gross misconduct and possible impeachment on a complaint from civil society coalition #UniteBehind that she continued to serve as chairperson of the board of Prasa, after she was appointed a judge from 1 January 2018.

Her being a judge and working on Prasa’s board may be considered a breach of the separation of powers between the judiciary and the executive as Prasa is a state-owned entity run by the department of transport. Judges are not allowed to take up an appointment seen to be inconsistent with an independent judiciary or that would undermine the separation of powers doctrine.

Her request for her judicial appointment to be deferred, in order to fulfil this role, is also alleged to have unlawful. as according to #UniteBehind, “[T]here is no constitutional or legislative power for the president to revoke, withdraw an appointment permanently or temporarily, or to reappoint a judge without a formal interviewing process through the JSC [and] any such instance must interfere with the separation of powers and the legal principle of life-long tenure”. There are only two mechanisms for the termination of a judicial appointment, said the group. These are “resignation or removal under section 177 of the Constitution through a process that involves the JSC and the National Assembly”.

The organisation also alleges that, during her time on the board at Prasa, she pushed through — contrary to the legal advice of her own legal affairs division — the settlement of claims for about R59m with a set of companies in the Siyaya group, owned by Makhensa Mabunda. Mabunda was politically connected to Prasa’s former and allegedly corrupt CEO Lucky Montana.

The Siyaya group had almost R1bn worth of contracts with Prasa, making the contracts part of a bigger state capture pattern, #UniteBehind alleges. Her conduct as far as these claims were concerned was materially prejudicial to Prasa’s interests and therefore amounted to gross misconduct, the organisation adds.

Judge Makhubele denies all of #UniteBehind’s allegations, arguing that they are being made to tarnish her reputation and harm her. She denies that she was a judge as from 1 January 2018 as she had not yet taken the oath of office. Makhubele says that she only took up judicial office on 1 June 2018, after President Ramaphosa had rescinded an earlier decision and redetermined her start date.

Furthermore,  her request to Judge President Mlambo for a later start date was simply because she needed to wind up her affairs in legal practice, including her role as chairperson of the Water Tribunal. Makhubele says that she did not breach the separation of powers principle because she did not occupy dual offices as Prasa chairperson and judge, as she had already resigned her Prasa chairperson role on 16 March when she became a judge on 1 June 2018.

Makhubele also denies that she interfered improperly in legal cases at Prasa or that she side-lined the internal legal team. She says that the decision to disband the panel of attorney was taken by a collective of the Board and it is unfair to single her out for discipline without doing the same for her fellow board members. For this reason, #UniteBehind was acting against her due to improper motives, including racism against her as a black woman.

The Tribunal will have to investigate the truthfulness of these allegations, including Makhubele’s denials. It will have to collect documents but also call witnesses to testify.

THE COMPOSITION AND PROCEDURE OF THE MAKHUBELE TRIBUNAL

The Makhubele Tribunal is made up of retired Supreme Court of Appeal Judge Fritz Brand as Tribunal President, alongside retired Gauteng High Court Judge Seun Dimphemetse Moshidi and Ms Noxolo Maduba-Silevu, a practising attorney in Bloemfontein.

The Tribunal is entitled to appoint a member of the National Prosecuting Authority as evidence leader, after consultation with the Minister of justice and the National Director of Public Prosecutions. The Makhubele Tribunal has appointed  as evidence leader KwaZulu-Natal Director of Public Prosecutions, Advocate Elaine Zungu. She is assisted by Advocate Dorian Paver.

The Tribunal may conduct its investigation through:

The Tribunal is entitled to subpoena documents and may call witnesses to testify at the hearing.

The Tribunal must complete its investigation within three months of the hearing, and to submit a report  to the JSC within one month of completing the investigation.

The Makhubele Tribunal is scheduled for a hearing on 10 and 11 January 2022 at the Office of the Chief Justice in Midrand, Gauteng.

According to the Terms of Reference the Tribunal hearing is private, however the Tribunal President may decide, if it is in the public interest and for the purposes of transparency, whether all or any part of the hearing will be held in public.

Disciplinary proceedings against judges are a vitally important accountability mechanism for the Judiciary. In light of the principle of open justice, including the important constitutional principle of transparency, the public interest is most better served by the proceedings being held in the open through broadcasting them live.

The Makhubele Tribunal was scheduled for a hearing on 10 and 11 January 2022 at the Office of the Chief Justice in Midrand, Gauteng. However, on 22 December 2021 the JSC confirmed that the hearing has been postponed to a later date that is yet to be confirmed.

Although the JSC does not state the basis for the postponement, we understand that it might relate to the availability of one of the parties’ legal representatives and also to a request for the recusal of the Tribunal President, Judge Fritz Brand. We will find out more information and update you as soon as we are able.

Read the letter from the JSC here.

According to Section 177 of the Constitution:

(1)  A judge may be removed from office only if—

(a) the Judicial Service Commission finds that the judge suffers from an incapacity, is grossly incompetent or is guilty of gross misconduct; and

(b) the National Assembly calls for that judge to be removed, by a resolution adopted with a supporting vote of at least two thirds of its members.

(2) The President must remove a judge from office upon adoption of a resolution calling for that judge to be removed.

(3) The President, on the advice of the Judicial Service Commission, may suspend a judge who is the subject of a procedure in terms of subsection (1).

The Judicial Conduct Tribunal must submit a report to the JSC on its findings on the allegations against Judge Makhubele. The Tribunal report must indicate whether Judge Makhubele is guilty of gross misconduct, any other form of misconduct or find her not guilty.

If the JSC upholds the Tribunal’s finding of gross misconduct against Judge Makhubele, it may invoke section 177(1)(a) of the Constitution, which could result in Judge Makhubele being impeached. The JSC must transmit its decision on impeachment to the National Assembly in Parliament.

In order for a judge to be impeached the National Assembly must vote for impeachment by a two thirds majority.