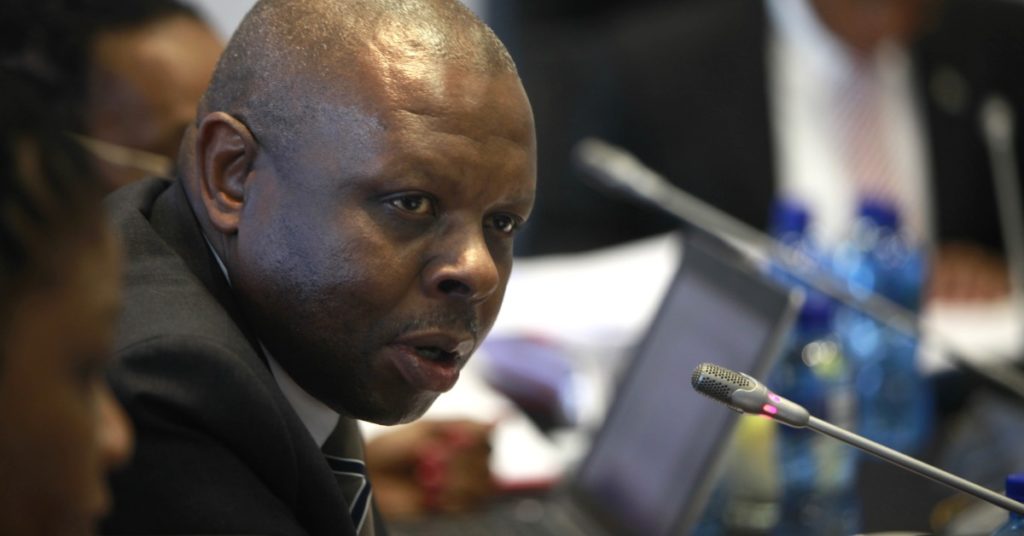 John Hlophe is the current Judge President of the Western Cape Division of the High Court. This makes him the most senior Judge in the Division. He was appointed to this position in 2000 and will remain the Judge President until he retires.

Since becoming Judge President, Hlophe has been involved in a number of controversial matters including:

WHAT IS JUDGE HLOPHE’S TRIBUNAL ABOUT?

“The alleged incident, which has hung like a dark cloud over the judiciary for almost a decade, relates to a complaint lodged by the full Constitutional Court Bench, which alleged Hlophe approached Jafta and Nkabinde in their chambers and sought to improperly influence them in a matter before the court involving Zuma, then an ordinary citizen.” – City Press, 2018

In 2008 there was case before the Constitutional Court involving Jacob Zuma, who at that time had not yet become President of South Africa. This was a corruption case concerning Zuma and the arms company Thint, and their role in the multi-billion Rand arms deal.

It is alleged that Judge President Hlophe approached Constitutional Court judges Bess Nkabinde and Chris Jafta and attempted to influence their decision in favour of Jacob Zuma in the case.

The complaint regarding this was made to the Judicial Service Commission on behalf of all the Constitutional Court Judges. (Read a copy of the full statement issued by Chief Justice Pius Langa.)

WHY HAS IT TAKEN SO LONG?

Marianne Thamm argues in a Mail and Guardian article;

“Hlophe has employed Jacob Zuma’s Stalingrad strategy when it comes to facing the JSC inquiry into alleged misconduct. It is a case that had dragged on for almost a decade.”

The process has been dogged by a series of court cases over the past ten years. As the JSC set up process to try and deal with the complaint in a formal manner the constitutionality of these processes where challenged by various complainants on both sides of the issue.

Following the initial lodging of a complaint against Hlophe in 2008, a sub-committee of the Judicial Service Commission (JSC), conducted a preliminary investigation into the complaint.

After some preliminary postponements the JSC, by majority decision, refused a further postponement. Hlophe’s counsel asked to be excused on the basis that they could serve no useful purpose in the absence of their client and without instruction. The matter then proceeded in the absence of Judge Hlophe and his legal representatives.

An urgent application by Hlophe to the South Gauteng High Court, Johannesburg, for an order declaring the entire proceedings of the JSC unlawful and therefore void ab initio was partly successful in that the court set aside the proceedings of 7 and 8 April 2009 and ordered that they were to commence de novo on a date suitable to the parties. The court could find no basis for a finding that the proceedings on 5 July 2008 were unlawful.

After hearing the matter, the sub-committee’s report was sent to the JSC, who dismissed the complaints by a majority vote.

This view was challenged in court by the NGO Freedom Under Law. They were successful in their appeal. The SCA and the Constitutional Court dismissed Judge President Hlophe’s appeal.

Constitutional Court judges Jafta and Nkabinde challenged the JSC’s decision to hold a preliminary enquiry and set up the tribunal, as well as aspects of the procedures used for the misconduct hearing, saying it was important to get it right, although they denied wanting to stop the hearing altogether.

As per the SCA judgment, the challenge was 1) to JSC’s decision to hold a preliminary enquiry and constitute the tribunal, and 2) a challenge to the constitutionality of the provision of the JSC Act that provided for the involvement of a member of the NPA in collecting and leading evidence. (Read the full SCA judgment.)

Jafta and Nkabinde’s legal challenge went all the way to the Constitutional Court where it was again dismissed.

Just when it seemed that the appeal process had been exhausted and that there was no further legal recourse which could be employed to cause a delay, the JSC had to attend to the matter of Judge Nkola Motata’s pending tribunal first before proceeding with the Judge Hlophe matter, because Judge Motata had also challenged the constitutionality of the disciplinary process. After Judge Motata’s legal challenge was unsuccessful, his Judicial Conduct Tribunal was held in January 2018.

The Judicial Conduct Tribunal was scheduled to begin on Monday 2 July 2018. The Tribunal members and counsel convened at the Park Inn Hotel, in Sandton. Justices Bess Nkabinde and Chris Jafta were also present as they had made themselves available to be called as witnesses. Judge President Hlophe was not present.

As the meeting convened the chairperson of the Tribunal, Judge Labuschagne, said that Tribunal member Judge Musi had a prepared statement to make. In his statement Judge Musi said that the Tribunal had received an urgent affidavit from Judge President Hlophe calling on Judge Musi to recuse himself due to some disparaging remarks he had allegedly made about Hlophe in 2017. Judge Musi denied these allegations but stated that in light of the circumstances he was recusing himself from the Tribunal.

“Having considered the manner in which this whole issue has unfolded, the fact that Judge President Hlophe called me and made certain ex parte communications to me without having the other parties there, the interests of justice and obviously the interests of the judiciary — I do not think the judiciary needs this at this stage.”

Judicial Conduct Tribunals are made up of three members, and as Judge Musi has recused himself, the Chief Justice will now have to appoint another judge to sit on the Tribunal. The Tribunal cannot continue until this new member is appointed.

Judge Labuschagne has postponed the Tribunal sine die (which means that the date of the next hearing has yet to be determined).

Watch the video of the Tribunal meeting here:

JUDGE MAKGOKA APPOINTED TO THE TRIBUNAL

Late in October 2019 we were information that the Judicial Conduct Tribunal for Judge Hlophe would resume on Monday, 21 October 2019, in Johannesburg.

We were then informed by the Office of the Chief Justice late on Friday evening (18 October 2019) that the Judicial Conduct Tribunal for Judge Hlophe was to be postponed. A new date has not yet been decided.

According to Times Live, in a statement, the tribunal said:

“Regrettably, the tribunal is unable to commence with hearings due to an unresolved dispute regarding legal fees between the Office of the State Attorney and Judge President Hlophe’s attorney.

“The tribunal president, Judge Labuschagne, is exploring other avenues to ensure that the dispute is resolved to enable the tribunal to convene as soon as it is practically possible and deal with this long outstanding matter.”

Download the press statement: Postponement of the Hearings of the Judicial Conduct Tribunal

According to Section 177 of the Constitution;

(1) A judge may be removed from office only if—

(2) The President must remove a judge from office upon adoption of a resolution calling for that judge to be removed.

(3) The President, on the advice of the Judicial Service Commission, may suspend a judge who is the subject of a procedure in terms of subsection (1).

If the Judicial Conduct Tribunal finds that sec 177(1)(a) of the Constitution should be invoked, then this could result in Judge President Hlophe being impeached. The findings of the Tribunal will go back to the JSC, who must decide on the next steps to have the judge impeached. In order for a judge to be impeached The National Assembly must vote for impeachment by a two thirds majority.

How does the JSC deal with complaints against Judges.

Judges Jafta and Nkabinde call for a rescission in Hlophe decision.

[2 July 2019] Mail and Guardian: Hlophe tribunal: Another year of uncertainty?

[2 July 2018] Mail and Guardian: Hlope tribunal: Yet another delay

[11 June 2017] IOL: Judge Hlophe found to have ‘misdirected himself’ in personal lawyer’s case.

[17 April 2012] SABC News: Litigation commission to be set up for Hlophe matter:

Rules made in terms of Section 25(1) of the Judicial Service Commission Act, 1994 (Act No.9 of 1994), to regulate procedures before Judicial Conduct Tribunals.

Legal Instruments of the JSC.