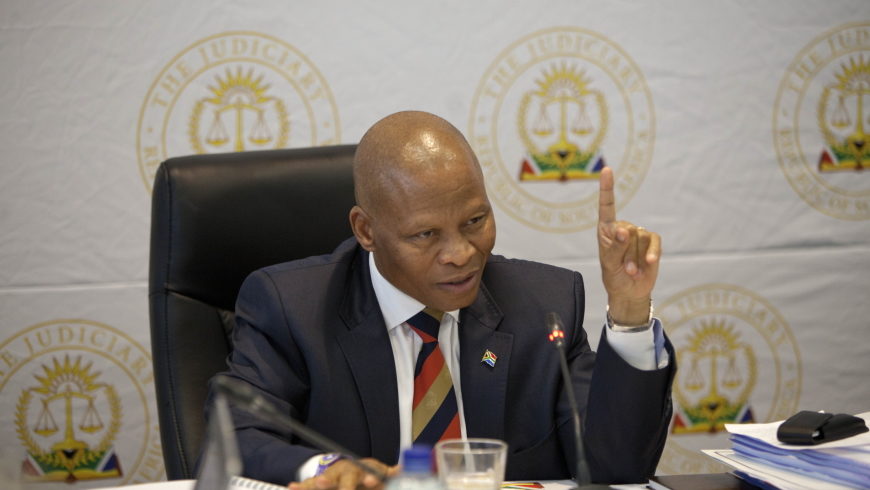 The Chief Justice is in the news again. While appearing on an online discussion with Chief Rabbi Warren Goldstein, hosted by the Jerusalem Post newspaper, the Chief Justice commented that he was:

“under an obligation as a Christian to love Israel, to pray for [the] peace of Jerusalem, which actually means the peace of Israel and I cannot, as I Christian, do anything other than love and pray for Israel, because I know, hatred for Israel by me and for my nation, can only attract unprecedented curses upon our nation.”

The Chief Justice further commented that he felt that South Africa was denying itself “a wonderful opportunity of being a game changer in the Israeli/Palestinian situation”, and asked rhetorically whether South Africa had:

“cut diplomatic ties with our previous colonisers? Have we embarked in a disinvestment campaign against those that are responsible for untold suffering in South Africa and the continent of Africa? Did Israel take away our land? … I believe that we would do well to reflect on these things as a nation, and reflect on the objectivity involved in adopting a particular attitude towards a particular country that does not seem to have taken as much, and unjustly, from South Africa and Africa as other  nations that we considered to be an honour having some diplomatic relations with.”

These are truly remarkable statements. It is highly unusual for any judge, let alone the head of the judiciary, to comment publicly on such a politically sensitive topic, and one that touches directly on foreign policy, which is determined by the ‘political’ branches of government, i.e. the Executive and Parliament. The Jerusalem Post’s headline following the event, titled “South Africa’s chief justice laments country’s lopsided attitude to Israel-Palestinian conflict”, illustrates as much.

A storm of criticism about the Chief Justice’s statements

Unsurprisingly, the remarks have provoked a storm of criticism. The ANC released a measured but powerful statement expressing “deep concern” about the Chief Justice’s statements, adding that he had “entered the arena of political commentary which may make him vulnerable should he have to adjudicate a human rights matter in the future.”  Civil society organisation #Africa4Palestine has threated to lodge a complaint against the Chief Justice with the Judicial Service Commission. Concerns have also justifiably been raised about the comments in light of the fact that there is a pending Constitutional Court judgment in a case relating to a hate speech complaint made by the South African Jewish Board of Deputies, in which the Chief Justice sat as a member of the panel of judges hearing the case.

There have also been views expressed in support of the Chief Justice. A Sunday Times editorial on June 29th suggested that “[c]alls to censure him are misplaced: a sense of natural justice must prefer a judge who speaks his mind rather than one who is whipped into singing for his supper.”

Is the criticism of the Chief Justice’s comments justified, or is this being used by his critics as a way to attack him?

We think that there are some significant problems with the Chief Justice’s comments.

First, we do not believe that the subject matter was appropriate for the Chief Justice to comment on publicly in the way that he did. Whatever one’s views on the conflict relating to Israel and Palestine, it would be hard to dispute that it is one of the most contentious topics imaginable. South Africa’s relationship to Israel is a matter of foreign policy determined by the executive. It is not appropriate for the head of another branch of government to be commenting publicly on what that policy should be. The judiciary is not constitutionally vested with the power to make foreign policy, nor is it democratically accountable for the content of that policy. This is not a situation where the judiciary has fulfilled its constitutional mandate to test the constitutionality of government policy. It is a situation of the country’s most senior judge criticising government policy on a highly sensitive topic.

The Chief Justice must have been aware of the sensitivity of the topic of relations with Israel. In April 2016, while chairing the Judicial Service Commission interviews for judges, he intervened with the following remarks when Advocate Michael Donen SC was asked to give his views on “the demand for the existence of an independent state of Palestine”:

A question of politics

Furthermore, the Chief Justice’s comments not only raise question marks about current cases before the Constitutional Court, but may also cause problems in future cases. It is far from unlikely that, for example, the BDS (Boycott, Disinvest, Sanction) movement may in future be involved in litigation before the Constitutional Court. The Chief Justice could of course recuse himself. But it is undesirable to create unnecessarily a situation that may require the most senior judge in the country to recuse himself from hearing a case.

Second, the fact that the comments may have been purportedly made in a private capacity do not help. They are still comments made by the Chief Justice. Whilst he is free to hold his views, whether they should be stated on a public platform like this is a different matter. We think they should not. It is also important to note that the Chief Justice’s appearance on the webinar was not based entirely on his status as a private citizen. He was described as Chief Justice on the announcement, and indeed the title of the event, “Two Chiefs, One Mission” expressly invokes his position as Chief Justice. The Code of Judicial Conduct, which the Chief Justice himself made law in 2012, expressly prohibits judges from being involved in political controversy unless it is necessary for the discharge of their judicial office. As the Chief Justice said in 2016, the Israel/Palestine conflict is a “highly sensitive political topic” it is difficult to imagine how participating in a public discussion on such a controversial topic discharges any judicial function.

Third, these comments may provide fuel for those who criticise the judiciary for “over – reaching” and going beyond their mandate. We have frequently seen politicians making this argument when they don’t like the outcome of court cases. Just a few days ago the Chief Whip of the ANC in Parliament complained that the Constitutional Court ‘overreached’ its mandate when it ordered that independent candidates may run in provincial and national elections. The Chief Justice’s comments on Israel, made as they are on a public platform, are very different to a court applying the law and the constitution to scrutinise government action or legislation. It is easy to imagine that these comments may be used by critics of the judiciary to attack the courts for supposedly over-reaching their mandate and trying to influence the politics of the day. Previous judgments written by the Chief Justice and his colleagues may be revisited, and used to illustrate an argument that judges are ‘political animals’ hiding behind judicial robes. This would be damaging to the good reputation the judiciary has forged. It seems unnecessary and unwise for the Chief Justice to have provided potential ammunition for these criticisms.