Criteria for the appointment of the next Chief Justice 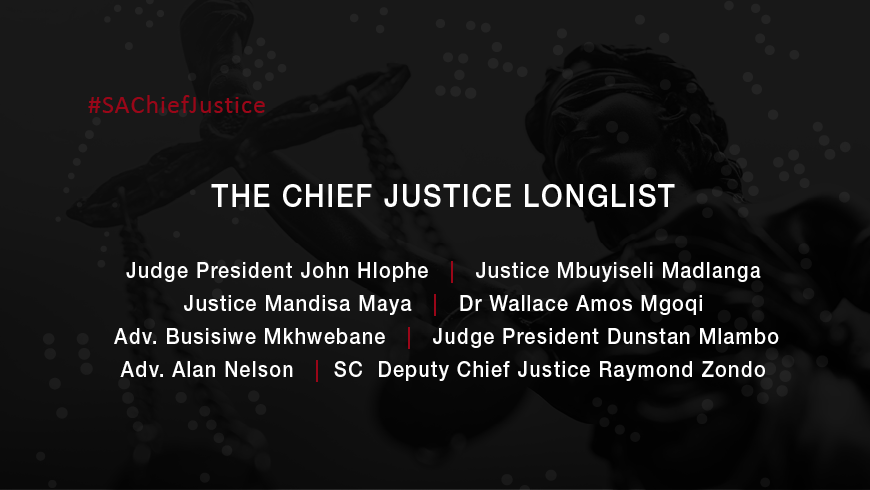 Criteria for the appointment of the next Chief Justice

The term of office of Chief Justice, Justice Mogoeng Mogoeng, came to an end on 11 October 2021. Section 174(3) of the Constitution of the
Republic of South Africa, 1996 (the Constitution) provides as follows:

“(3) The President as head of the national executive, after consulting the Judicial Service Commission and the leaders of parties represented in the National Assembly, appoints the Chief Justice (emphasis added) and the Deputy Chief Justice and, after consulting the Judicial Service Commission, appoints the President and Deputy President of the Supreme Court of Appeal.”

1.2 To promote transparency and enable public participation, The President Ramaphosa (the President) has invited all South Africans to submit nominations of candidates for the position of the next Chief Justice.

The President appointed the Shortlisting Panel  who will need to assess and scrutinise all received nominations against the assessment criteria stated in this document and below.

Appointment criteria for the next chief justice

In determining whether a candidate is suitable to be shortlisted and recommended for nomination by the President for purposes of filling the vacancy of the Chief Justice, the Panel must assess whether such candidate—

5.1 is a fit and proper person who possess the qualifications, skills, knowledge and
expertise reasonably expected of an incumbent of the position of the Chief
Justice;

5.2 meets the constitutional requirements for appointment including with regard to
citizenship and mandatory age for discharge from active service;

5.3 as head of the Judiciary, demonstrates the ability and capability to:-
(a) defend, protect and uphold the Constitution;
(b) create a conducive environment for asserting the independence of the
judiciary and respect for separation of powers; lead and spearhead South
Africa’s transformative jurisprudence geared for the advancement of social
justice and access to justice; and
(c) promote a culture of work ethic geared to meet the acceptable judicial
performance standards and standards of accountability.

5.4 is reputed to be, of unblemished integrity, be beyond reproach, possess moral
leadership qualities and strong skills that would assist in promoting and
enhancing an harmonious environment for the entire judiciary;

5.6 Demonstrate a level of sensitivity and objectivity towards equality in terms of
race, gender, persons with disabilities, LGBTI people and other vulnerable
groups.