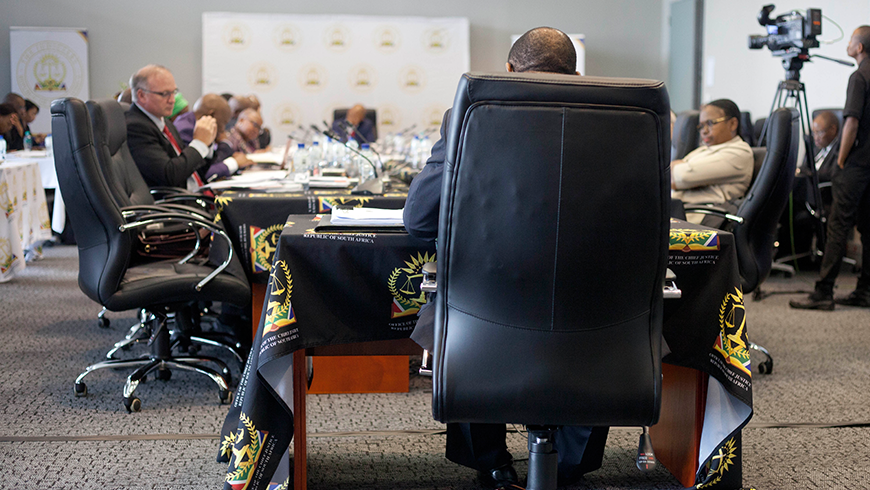 In recent times, the criticism of the Judicial Service Commission’s free-for-all style of interviews has grown more trenchant and more pointed. Following the chaotic interviews for chief justice, the public is fast losing patience with the JSC, and confidence in the judicial appointment process. There is, naturally, a huge expectation that the JSC sitting from 4 – 8 April will signal that the institution has turned a corner.

There are some early indications for optimism. The first is that Chief Justice Raymond Zondo will sit as chairperson of the JSC. He has already proven himself capable, following his careful steering of the October 2021 round of JSC interviews that critics agree were more focused, respectful, and dignified.

The second is that the JSC has already committed itself to reforming the way it does things. Judges Matter has proposed three reforms: a set of written criteria, a code of conduct for commissioners, and clear rules of procedure. The JSC set aside the first day of the April 2022 sitting (Monday, 4 April) to “discuss the JSC mandate” and these three key reforms were on the agenda.

Two new members have also joined the JSC in recent days: Advocate Sesi Baloyi SC and Advocate Kameshni Pillay SC. Both are members of the Johannesburg Bar with stellar reputations for integrity, forensic skill, and activism towards transformation. Both have held leadership positions in the legal profession as members of professional bodies (Baloyi was chairperson of the Joburg Bar Council, while Pillay is a member of the Legal Practice Council).

Over the course of four days from Tuesday, the JSC will interview 28 candidates for 11 vacancies in the superior courts. In this round, the JSC will seek to fill the two remaining vacancies on the Constitutional Court, following the retirement of four senior justices last year. Six candidates were initially shortlisted, but we understand that Johannesburg Judge Keoagile Matojane has withdrawn his candidacy, although the reasons for this are unclear. This leaves only five candidates for the two posts. This has huge implications.

Section 174(4)(a) of the Constitution requires the JSC to submit to the president three more names than is required to fill a vacancy on the Constitutional Court. If there is only one vacancy, then the JSC must submit a minimum four names. For two vacancies, five names are needed, and so forth. Currently, there are two vacancies but only the bare minimum of five candidates. This means that the JSC has no choice but to forward all the names already on the shortlist.

The JSC would have to find exceptional circumstances to decide to drop one name out and leave one of the vacancies open. In the Cape Bar Council v JSC case, the Supreme Court of Appeal held that the JSC needs a valid reason to leave a vacancy open. If no valid reason exists, the JSC’s decision not to fill that vacancy would be irrational and unlawful. The JSC is therefore hard-pressed to forward the shortlist as it exists, unless any of the candidates performs spectacularly poor at the interview, which is highly unlikely.

Four of the five candidates have been interviewed twice before for the same vacancy. Advocate Alan Dodson SC and Judge David Unterhalter were both interviewed but never recommended by the JSC. Judges Mahube Molemela and Fayeeza Kathree-Setiloane have both been recommended by the JSC but had to do a rerun following a court settlement between CASAC and the JSC, and were later overlooked for appointment by President Ramaphosa.

Judge Owen Rogers is the only newcomer on this shortlist but is highly regarded as one of the country’s finest judges. He recently completed an acting stint at the Constitutional Court, where he wrote the majority judgment that led to the 2021 local government elections going ahead despite Covid-19.

The racial dynamics of the Constitutional Court (there are currently no white permanent judges on that Bench) will also likely feature in the interviews. During his interview for chief justice, Justice Zondo indicated that it might be time for the JSC to consider the racial composition of the Court and broadly align them with the demographics of SA, as section 174(2) of the Constitution requires of the JSC to do. Three of the five candidates are white, two are women, and one of those two is Indian – the Concourt has never had an Indian woman on its bench.

So, whichever way you look at it, the withdrawal of Judge Matojane has meant that the real decision on who next will sit on the Constitutional Court now lies with the president as opposed to the JSC.

Several other posts will also be filled during this week: the judge president vacancies in KwaZulu-Natal and North West, a particularly competitive round for two judge positions in the Eastern Cape High Court (Gqeberha), three posts in KZN, two in Limpopo, and one in the Free State.

There are several posts that will not be filled in this round. There are three vacancies in the Competition Appeal Court (including the head of that court, after the sole candidate tragically passed away), and one vacancy in Gauteng High Court on secondment to the Land Claims Court (the sole candidate withdrew). The JSC has still not explained why the Deputy Judge President of the Labour Court has neither been advertised or filled (we understand that there are proposed amendments to the legislation but leaving a vacancy is also untenable in such a busy court).

Ultimately, it remains to be seen whether the JSC has indeed turned a corner. These upcoming interviews may be the last attempt at salvaging the tattered reputation of a hugely important institution in our constitutional democracy.

A version of this article was published in the Daily Maverick, see here:

See the full list of candidates shortlisted for the April 2022 JSC round:

Read the DGRU submission for the April 2022 JSC sitting: