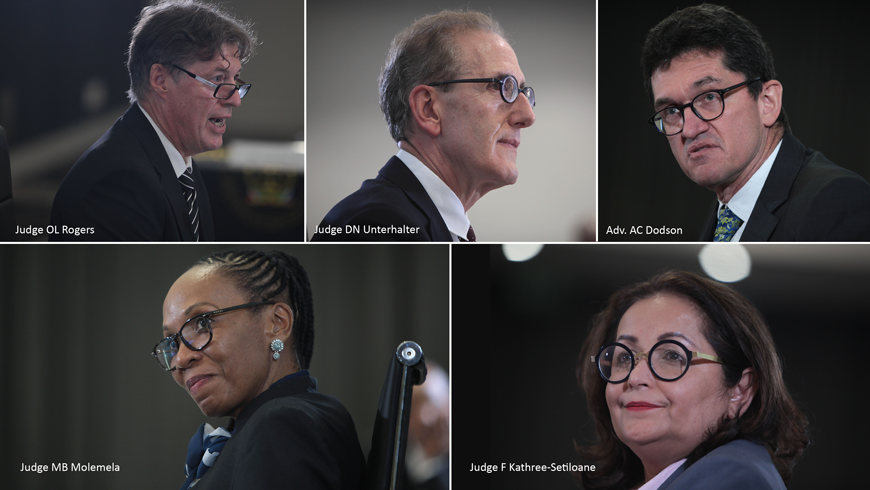 Over the course of four days between 4 and 8 April, the JSC will interview 28 candidates for 11 vacancies in the superior courts. In this round, the JSC will seek to fill the two remaining vacancies on the Constitutional Court, following the retirement of four senior justices last year.

Six candidates were initially shortlisted, but we understand that Johannesburg Judge Keoagile Matojane has since withdrawn his candidacy, although the reasons for this are unclear. This leaves only five candidates for the two posts. This has huge implications.

Section 174(4)(a) of the Constitution requires the JSC to submit to the president three more names than is required to fill a vacancy on the Constitutional Court. If there is only one vacancy, then the JSC must submit a minimum four names. For two vacancies, five names are needed, and so forth. Currently, there are two vacancies, and only the bare minimum of five candidates. This means that the JSC has no choice but to forward all the names already on the shortlist.

The JSC would have to find exceptional circumstances (other than spite) to decide to drop one name out, and leave one of the two vacancies open. In the Cape Bar Council v JSC case, the Supreme Court of Appeal held that the JSC needs a valid reason to leave a vacancy open, and if no valid reason exists, the JSC’s decision not to fill that vacancy would be irrational and unlawful. The JSC is therefore hard-pressed to forward the shortlist as it exists, unless any of the candidates performs spectacularly poorly at the interview – which is highly unlikely.

Four of the five candidates have been interviewed twice before for the same vacancy. Advocate Alan Dodson SC and Judge David Unterhalter were both interviewed in 2021, but never recommended by the JSC. Judges Mahube Molemela and Fayeeza Kathree-Setiloane have both been recommended by the JSC, but had to do a rerun (following a court settlement between CASAC and the JSC) and were later  overlooked by President Ramaphosa.

Judge Owen Rogers is the only newcomer, but is highly regarded as one of the country’s finest judges. He has recently completed an acting stint at the Constitutional Court where he wrote the majority judgment that led to the 2021 local government elections going ahead.

During his interview for chief justice, Acting Chief Justice Raymond conceded that, even though there is no requirement that there be white judges on the Constitutional Court, it was now time to look at the racial composition of the court. This, he said, would be in line with section 174(2) of the constitution, which required that the judiciary ‘reflect broadly the racial and gender composition of South Africa’. Some have taken this to mean that the April 2022 sitting is the ‘white man’s round’ as three of the five candidates are white men.

There is however no guarantee that any of the white men will be appointed. Unterhalter was previously President Ramaphosa’s lawyer on the Marikana Commission, and that might make him politically unpalatable in the 10th year anniversary of the massacre. He has also stumbled over questions about his membership and rushed resignation of the executive committee of the SA Jewish Board of Deputies. Dodson is currently not a permanent judge and may be seen as an outsider to the judiciary. Rogers is 64 and, if appointed, would serve the shortest stint of all candidates: only 6,5 years. These are of course not disqualifying factors, but are important factors to consider.

Whichever way you look at it, the withdrawal of Judge Matojane has put a spanner in the works and has also meant that the real decision on who next will sit on the Constitutional Court now lies with the president, as opposed to the JSC. However, one can never predict how the JSC will respond.