Webinar on the JSC’s Chief Justice interviews: What is to be done? 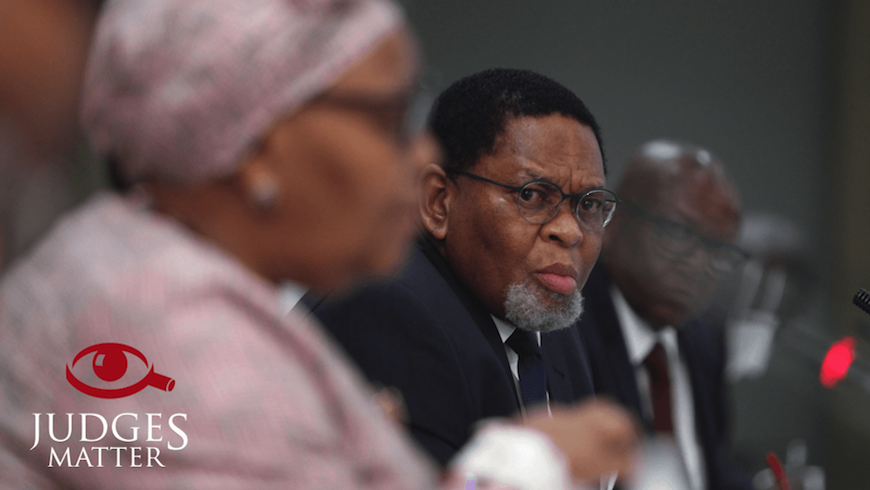 Webinar on the JSC’s Chief Justice interviews: What is to be done?

On Wednesday, 24 February 2022, Judges Matter participated in a panel discussion to reflect on the Judicial Service Commission’s recent Chief Justice interviews that have come in for some harsh criticism.

Hosted by the Catholic Parliamentary Liaison Office (supported by the Hann Seidel Stiftung), the panel featured Alison Tilley and Mbekezeli Benjamin from Judges Matter, and Dan Mafora from CASAC (the Council for the Advancement of the SA Constitution).

The panel was facilitated by the CPLO’s Mike Pothier, who led the discussion on key aspects of the CJ interviews and ideas on reform to the Judicial Service Commission and improvement of interviews going forward.

Some of the points of the discussion and Judges Matter’s response to them are summarised below.

Is the JSC on paper well designed for its purpose; or does it need restructuring? And can that be done without a constitutional amendment?

In Judges Matter’s view, the JSC is well-structured in terms of the diversity from which it draws its members – it is probably the only structure where the three arms of state sit together for the purposes of a single task. However, the membership could be adjusted to create a smaller, more nimble institution than the current 25-member body. There could be 5 instead of 10 MPs, and 2 instead of 4 president’s representatives. This change cannot be done without a constitutional amendment.

Is there a problem with the personnel? E.g: do the political appointees do their job properly? What about the legal profession’s representatives?

Speaking of personnel, we think the JSC is chronically understaffed for the weighty responsibilities that sit on its shoulders. The secretary of the JSC doubles up as the secretary of the Judicial Conduct Committee, but also the Judicial Conduct Tribunal. We think there should be dedicated staff for each of the JSC’s functions. In comparison, the Magistrates Commission has separate secretaries for both its appointment and disciplinary functions.

In terms of the commissioners themselves, we think overall, most members of the JSC are dedicated to the task and come prepared to carry it out. However, we have noticed that some use the JSC as a platform to advance ulterior agendas. We can’t draw a bright line between “political appointees” and “legal professionals” as those who carry the blame. The recent Chie Justice interviews show us that it straddles both groups. This is why it is essential that the JSC has a written code of conduct for commissioners.

Should civil society have a presence on the JSC? Organisations like yours, for example. If so, how could this be arranged?

It’s selfish of us to say but yes, a civil society voice would help in balancing out perspectives.

The president currently has a free hand on four members of the JSC, and he can choose to include civil society representatives. They don’t even need to be legal experts – the job of a judge requires the highest integrity, why can’t an ethics expert be included? The NPA is one of the biggest users of the courts, why can’t a representative be drawn from there? The same could be said about Legal Aid SA.

The point, however, is that there should be someone who would bring a unique perspective from the judges, politicians, legal practitioners in private practice, and the legal academic. So yes, a civil society representative should be included!

Should there be a more uniform approach to the interviews – a more standardised set of questions, or at least a clear set of criteria against which candidates can be assessed?

Yes, absolutely. Criteria or some sort of guidelines are absolutely necessary. Candidates applying to be judges must be aware of what will be required oof them. Criteria would also help in focusing the questions commissioners ask, and the discussions during deliberations. This would immediately improve the legitimacy of the entire process. It would also lead to fairness to candidates and commissioners themselves, who sometimes feel aggrieved when their questions are overruled (e.g Msomi and the Electoral Court).

This is of course not to say that there should be standardised questions, but commissioners must be able to formulate diverse questions arising from the same topic of discussion. For example, if the administrative experience is a criterion to be a head of question, commissioners can question a candidate on their administrative experience on the Bench but even while they were in practice. There are many ways of teasing this issue out.

Read our proposals for reforming the JSC