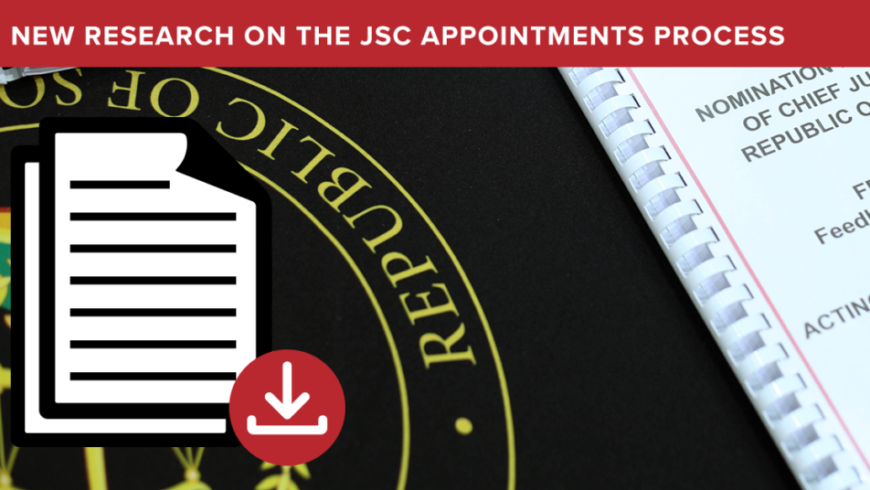 The controversial way that judges are appointed in South Africa has come in for some sharp criticism, with trenchant calls for a complete revamp of the system, including booting the politicians off the Judicial Service Commission. These solutions seem easy, but are they remedying the right problem?

Our latest research, published in an international academic journal, found that the problems within the JSC are deeper than meets the eye. The JSC interview process is fraught with inconsistencies that seriously challenge the credibility of the entire appointment process. In our view, the JSC developing a clear set of criteria for judicial appointment would be one of the first solutions to fixing the problem.

The historical context for the establishment of the JSC

In 1994, there was understandably deep mistrust of the then apartheid judiciary. There were legitimate concerns, about whether conservative judges, who had previously sentenced anti-apartheid activists to death, would be able to interpret a new human-rights-based legal framework or, even worse, stifle the new government’s development programme.

To guard against this eventuality, and break with the nepotistic past practice of judicial appointments, a new Judicial Service Commission was established. Chaired by the chief justice, the JSC was set up to appoint judges to the judiciary, but also to hold those judges accountable for misconduct. The JSC is meant to have a broad representation of lawyers, judges, members of parliament, and civil society.

Under this new dispensation, and in a boost for transparency, aspirant judges would be interviewed in public, by renowned human rights lawyers like George Bizos SC. They would scrutinise a candidate’s track record and check their commitment to the values of the new constitution. These values include equality, the human dignity, and the pursuit of human rights and freedoms. Only those who fit this bill would be appointed.

The JSC’s procedure for appointing judges

At its founding, the law gave the JSC a freehand on how it would go about its work of appointing judges. Section 178(6) of the Constitution gave the JSC broad discretion to determine its own procedure and processes. To boot, there was no guidance on how judges were to be disciplined (which the  never-ending Hlophe saga illustrates in tragically vivid colour). In subsequent years, the JSC has made several attempts to define and redefine what qualities it looks for when appointing judges.

The judicial selection and appointment process in South Africa begins with the JSC advertising the existing judicial vacancies. Following applications from aspirant judges, the JSC shortlists them for interviews that usually take place in April and October of each year. Following these interviews, the JSC recommends candidates for appointment by the President. In respect of candidates for the Constitutional Court, the JSC must send a list of three more names than is needed to fill a vacancy (at least 4 names for one vacancy, 5 for two, etc.)  The President makes the final appointments of Constitutional Court judges.

In 1998, then Chief Justice Ismail Mohamed drew up a set of guidelines to assist the JSC in its work of interviewing and selecting judges. The Mohamed Guidelines were used in subsequent years, until they somehow fell into disuse. In 2010, the JSC drew up new guidelines to further clarify the qualities the JSC looks for in candidates. It is not clear if these guidelines still hold any currency, especially because none of present members of the JSC were there when the guidelines were adopted. We had our suspicions, but instead of speculating, we went out to find evidence.

We conducted a qualitative research study to try and understand four questions:

How we did it: our research methodology

We conducted the research study through a detailed analysis of 123 transcripts of 119 candidates interviewed for the Superior Courts (high court judges) in the five year period between October 2015 and October 2019. The analysis of this research formed the basis of our new article published in the 2022 special edition of the British Journal of American Legal Studies .

In our analysis we found that there are four major themes that dominated the questioning in most interviews, although they were far from being consistent. It is from these themes that we can possibly discern some type of criteria. The themes are:

For each interview, we recorded whether any questions from each of these four themes  were asked of the candidates.

From each transcript, we also recorded the metadata of the particular candidate. This metadata included their title and name; the date and time of the interview; the declared race and gender of the candidate using the Employment Equity Act’s definitions of Black and White (with black being a generic term to refer to Africans, Coloured and Indians); the length of the interview in minutes; and whether the candidate was recommended by the JSC and ultimately appointed by the president.

There were some limitations in the study, which influenced data and analysis, but their impact does not substantially affect the results.

The most significant limitation was accessing interview length data for 25 of the interviews done completed in the October 2015 round. This was prior to Judges Matter livestreaming the interviews, and producing individual video clips of the interviews. These interviews were excluded from part of our analysis.

The other limitation was that in our analysis, we distilled only four factors that seemed to dominate interviews. We accept however, that there may be other factors which influenced the course of the interview, and the ultimate decision on who is recommended for appointment and who is not.

Findings from the research: ‘JSC, we have a problem’

Our chief finding was that the JSC interview process was fraught with inconsistencies and the lack of observance of any objective criteria or standards to guide the JSC’s decision-making on judicial appointments.

What all of this demonstrates is that there is a significant inconsistency in how the JSC asks questions, and ultimately how these questions influence the decision to appoint a candidate as a judge.

What these findings mean: our analysis

These findings confirm some of Judges Matter’s biggest concerns about the way the JSC conduct interviews of candidates. The wild inconsistency in the questions asked, the discrepancy in the length and time allocated for each interview, and how these factors ultimately impact the decision for appointment, are issues that should concern us all about the judicial appointment process.

Of course, there is legitimate room for the JSC to vary in the ways it interviews candidates. A mechanical process where candidates are asked standard questions, with standard answers would defeat the robust, searching interview process we expect from the JSC. We anticipate that there would be many situations where candidates would be interrogated on issues such as ethics and integrity, jurisprudential philosophy, or their understanding of the social determinants of crime, that could stretch an interview for much longer. When one interview, however, goes on for nearly two hours while another in the same round, lasts only 3 minutes, legitimate questions have to asked about how the JSC understands its mandate and processes. This is even more concerning when you consider that the 3-minute interview led to the candidate being appointed, while the  2-hour interview did not.

One only needs to think back to the shocking interviews of April 2021 to understand the magnitude of the problem.  During the April 2021 interviews, commissioners harangued judges on cases certain politicians had lost before that judge; or the embarrassing situation where both a Jewish and Muslim candidate were asked whether their religious observances will interfere with their judicial responsibilities. These are not issues that should dominate an interview.

It came as no surprise to us when CASAC (the Council for the Advancement of the SA Constitution) took the JSC to court demanding that these interviews be set aside. Ultimately, a court settlement was reached and the interviews were re-run. However, one candidate withdrew, primarily because of the abuse and humiliation suffered before the JSC.

This is the risk we run while the JSC does not have a clear legitimate process: good lawyers will refuse to subject themselves to a humiliating process where nothing about their professional experiences, integrity or values are asked, and instead politicians and lawyers grandstand.

In our view, the implementation of explicit criteria to guide the JSC interview process will be the first, important step in addressing some of the concerns raised by the evidence.

What could these criteria include? There are plenty of examples from all over the world that the JSC can look toward. In 2020, Chief Justices of the Southern Africa region developed the Lilongwe Principles and Guidelines on Selection and Appointment of Judicial Officers.

The Lilongwe Principles set objective, minimum criteria for judicial appointments, and have excellence and merit at their core. The Lilongwe Principles also make room for a country like ours with a difficult history, where systemic racial and gender discrimination have meant that a vast section of our population were for many years excluded from the legal profession, making the way for more of these people to be affirmed as judges. The Lilongwe Principles go beyond the process of judicial appointment. They also provide guidelines on how interviews should be conducted, including length of time, and the kinds of issues that may permissibly asked at an interview.

Although section 178(6) of the Constitution give the JSC wide discretion to determine its own procedure, our research shows that the JSC is failing at developing a fair and credible process for judicial appointments.  We looked at factors like the length of interviews, and the key questions asked, to show that there are legitimate grounds for concern in how the JSC does its jobs. Of course, there may have been several others, but these were particularly useful as they provide an objective bases for analysis.

The evidence overwhelmingly shows that the JSC needs to articulate, publish and apply clear criteria for how it conducts interviews. For the sake of fairness and the legitimacy of the entire process, this needs to be done urgently. But written criteria is only the first step. The JSC also needs clear rules of procedure and a code of conduct for commissioners. We are heartened by the fact that in the April 2022 sitting the JSC has agreed to set the first day (Monday, 4 April) to discuss the JSC mandate and thrash out some of these issues. Their credibility – along with the reputation and esteem of the entire Judiciary – rests on them getting this right.

Judges Matter will stream the interviews live on our website but also livetweet the interviews as they progress. Keep an eye on www.judgesmatter.co.za and @WhyJudgesMatter on Twitter.

A version of this article was published in the Daily Maverick, see here: https://www.dailymaverick.co.za/article/2022-04-03-judicial-appointments-process-research-shows-cause-for-much-concern-but-theres-hope/

Read our proposals for reforming the JSC: https://www.judgesmatter.co.za/opinions/three-key-reforms-to-the-jsc-that-the-new-chief-justice-needs-to-lead-on/

Watch our webinar on the JSC’s criteria for judicial appointments: https://www.judgesmatter.co.za/opinions/webinar-on-the-criteria-employed-in-appointing-judges-in-south-africa/