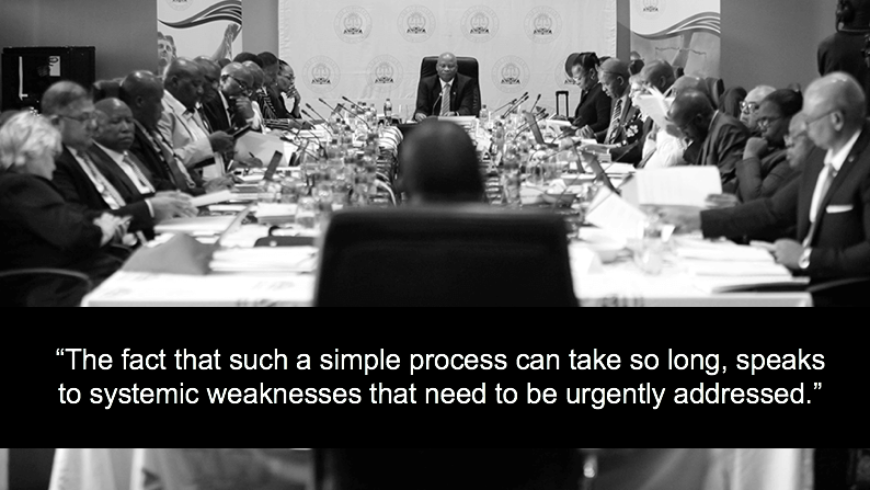 Once a candidate is interviewed and recommended by the Judicial Service Commission for appointment as judge, it should be little more than a series of administrative boxes that need to be ticked before they are officially appointed. Yet, in the latest round of interviews, it took over 10 weeks for this to happen, leaving commentators deeply concerned (see here, and here). Granted, the constitutional court appointments involve more hoops – but even so, it should not have taken so long.

The Constitutional Court closed off 2021 with a record five vacancies, following the retirement of several justices, including the Chief Justice. Delays in appointing judges has a knock-on effect, not only on the workload of the permanent judges of the court. It also risks the court not having sufficient judges to reach a quorate decision. In the Concourt, a minimum of 8 justices is required for a decision. But there is always the risk that the court may be split down the middle, with no clear majority – which is effectively a non-decision.

Although the President shoulders the heaviest blame, others have a role to play in the delay. The JSC itself took longer than it should have to interview for vacancies that first arose in 2019. And, once they had completed their part, the remaining process again took far longer than necessary.

Judges’ who were interviewed 8 October 2021, were only signed-off on 16 December 2021 – ten weeks after the interviews. Why did it take so long to complete a relatively straight-forward task? Concourt aside, in respect of all other judges nominated, the president has no discretion, but to appoint the candidates recommended by the JSC.

Concourt appointments follow a more elaborate process, so the delays are a little more understandable, although not excusable. In terms of section 174(4) of the Constitution, the JSC sends the President three more names than is required to fill the vacancy concerned. In this instance, five names were sent to fill two vacancies. The President has discretion to choose his preference from those five names – post a requisite consultation with political parties represented in Parliament and the Chief Justice. This elaborate process of consultation is bound to take a bit of time, but it can be streamlined.

Reasons for the delay

In the statement (see here) announcing the filing of the Concourt vacancies, the Presidency attributes the delay to others. It says the JSC only sent its recommendations to the President on 27 October 2021 – three weeks after the interviews.

The President only sent the letter consulting political leaders and the acting chief justice on 22 November (nearly a month after the JSC recommendation, and seven weeks after the interviews), inviting them to comment on the candidates by 14 December 2021.

According to that same statement, the Presidency shifts part of the blame in all these delays to the Department of Justice, which it says is required to make a formal submission in relation to the JSC’s recommended candidates. This submission apparently only came to the Presidency on 21 December 2021 – three days before the appointments were publicly announced.

It’s not hard to imagine that the delays may have also been caused by the local government elections on 1 November, and the campaign period during October when Parliament was in recess, but it’s not clear how much of the delay can be attributed to this.

The fact that such a simple process can take so long, speaks to systemic weaknesses that need to be urgently addressed.

The fact that there are even five vacancies on the Constitutional Court (including the Chief Justice) speaks to the JSC’s failure to plan. Concourt justices are appointed for a fixed term of between 12 and 15 years (although the latter is rare). They know perfectly well, when to anticipate a vacancy and when they should advertise, interview and appoint judges before the incumbents retire. In fact, this was how it was done as late as 2009, when the inaugural justices retired.

The situation speaks to poor coordination between the various bodies responsible for judicial appointments (the JSC, the Ministry of Justice, the Presidency and, to a lesser extent, Parliament). The fact that such a simple process can take so long, speaks to systemic weaknesses that need to be urgently addressed.

The entire process needs to be streamlined. But how?

So, within a short space of time (within three weeks), the President should have all the input he needs to make the final decision on which judges to appoint to the Concourt, and his decision should be publicly communicated as soon as possible. This will at the very least confirm the President takes seriously his constitutional duties and his oath of office.