Confusion reigns in the JSC interviews 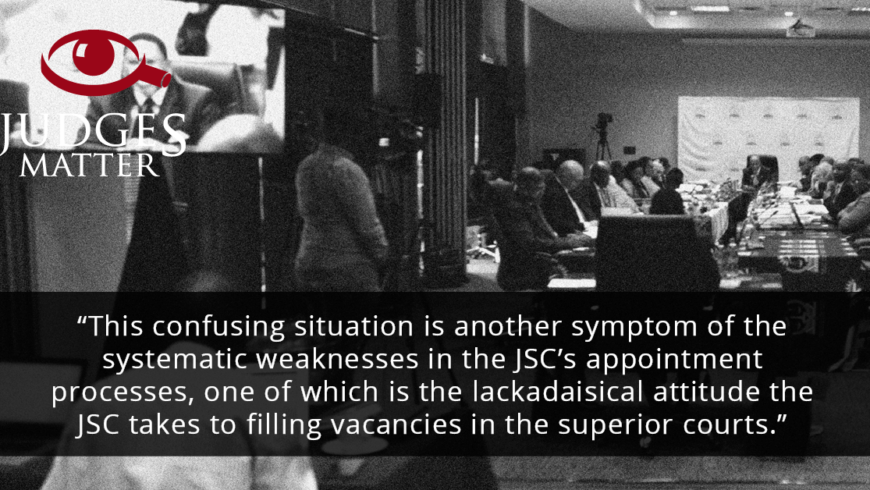 Confusion reigns in the JSC interviews

After a brief virtual hearing at the Johannesburg High Court on 18 August 2021, the Judicial Service Commission (JSC) came to a settlement on the litigation with the Council for the Advancement of the South African Constitution (CASAC). CASAC had sued the JSC arguing that the judges’ interviews for the Constitutional Court in April 2021 were unlawful, unfair and should be set aside [Read more]. In terms of the settlement, the High Court set aside the botched interviews and directed the JSC to rerun them [Read more]. However, that is not the end of the matter, as more questions have now arisen, and a great deal of confusion has set in.

The vacancies at issue

The JSC’s April 2021 interviews for the Constitutional Court were conducted to fill two vacancies that arose when Justice Edwin Cameron retired in August 2019 and Justice Johan Froneman retired in May 2020. Eleven candidates were shortlisted but two (Judge Yasmin Meer and Judge Aubrey Ledwaba) withdrew before the interviews. Ultimately nine candidates were interviewed, which were Advocate Alan Dodson SC, and Judges Fayeeza Kathree-Setiloane, Jody Kollapen, Rammaka Mathopo, Mahube Molemela, Dhayanithie Pillay, David Unterhalter and Bashier Vally. In terms of section 174(4)(a) of the Constitution, the JSC must nominate to the president three names more than the number of vacancies to be filled (with two vacancies, five names need to be sent). Following those interviews, the five nominees were Kathree-Setiloane, Kollapen, Mathopo, Molemela, and Vally [Read more].

Shortly after the JSC sent the list of nominees to the president, in May 2021 CASAC filed court papers demanding that the president be restrained from filling the Constitutional Court vacancies pending the full hearing of their lawsuit to set aside the April 2021 interviews. The CASAC litigation froze the situation, but time did not stand still.

In June 2021, the JSC sent out an advert calling for nominations for two more vacancies at the Constitutional Court. These are vacancies that would arise when Justice Sisi Khampepe and Justice Chris Jafta retire at the end of October 2021.

The interviews for these vacancies would be held in first week of October 2021. After the application deadline, the JSC announced a shortlist of candidates [Read more] to fill the Khampepe and Jafta vacancies but a strange twist in the story occurred: seven of the eight candidates interviewed for the Cameron and Froneman vacancies, five of whom had been nominated for appointment, were now also on the shortlist for the Khampepe and Jafta vacancies.

Confused? You are correct to be. Let’s try to explain…

It seems that all but one of the candidates who participated in the April 2021 interviews re-applied to be considered for the new vacancies. It was only Judge Pillay who did not re-apply. Although not required to do so, she has so far not given any reasons why she did not. Neither have any of the other judges (especially the five already recommended to the president) given any reasons why they chose to reapply (might they have been hedging their bets in case they are not selected for the Cameron/Froneman vacancies? We can only speculate).

Be that as it may, we now sit with a situation where, by end of October 2021, five of the 11 seats on the bench of the highest court in the land will be empty (this includes the Chief Justice’s position). Acting judges may be appointed but it’s not ideal for the apex court to be staffed by such a large number of acting judges.

What is to be done? A matter of sequencing

It seems to us that the sequencing of the two sets of interviews (the rerun of the April interviews, plus the upcoming October interviews) will be crucial. In our view, the best way for the JSC to proceed would be for the shortlist for the Jafta and Khampepe vacancies to be withdrawn and the interviews to be cancelled. Instead, the JSC should use the October 2021 sitting to rerun the botched interviews of April 2021 and fill the Cameron and Froneman vacancies as a matter of urgency. The advert for the Khampepe and Jafta vacancies must be reissued as soon as possible, with interviews to be scheduled early in 2022.

“This confusing situation is another symptom of the systematic weaknesses in the JSC’s appointment processes, one of which is the lackadaisical attitude the JSC takes to filling vacancies in the superior courts.”

This confusing situation is another symptom of the systematic weaknesses in the JSC’s appointment processes, one of which is the lackadaisical attitude the JSC takes to filling vacancies in the superior courts. Justice Cameron retired in August 2019, and the JSC should have already advertised and interviewed candidates by October 2019 (there’s no reason why that vacancy was left open until the coronavirus pandemic struck). The second weakness is the lack of clear criteria to guide the questioning and selection of suitable candidates for appointment [Read more]. The CASAC lawsuit was based precisely on this weakness. Ahead of the interviews in October 2021, the JSC needs to work hard at fixing these problems, otherwise it will find itself in and out of courtrooms for many years to come.