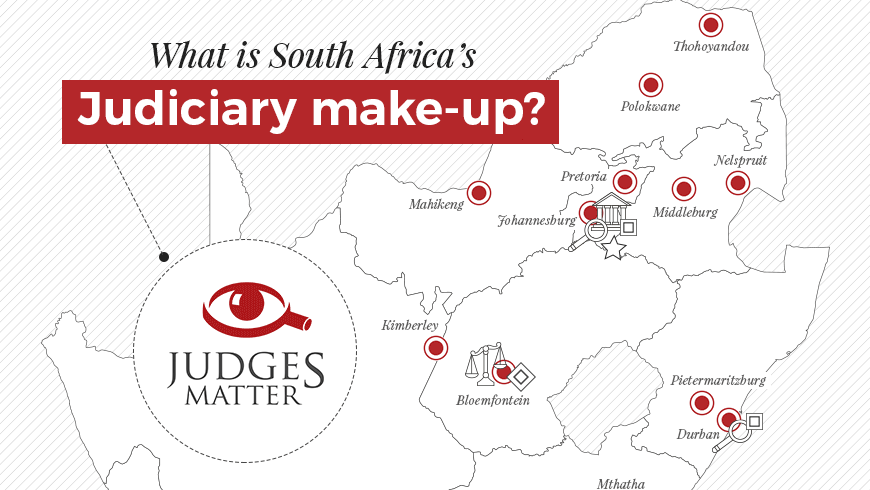 Judges Matter was curious about what South Africa’s judiciary looks like, and so we put together an infographic showing the racial and gender make-up of the judiciary.

Demographic representivity is recognised as an important component of the legitimacy of the judiciary in the eyes of broader society.

In 2016 we had 13 High Courts listed, in September 2020 we had 16, including the Limpopo Division, Polokwane (opened 2016), and Mpumalanga Division, Nelspruit and Mpumalanga Local Division, Middleburg (opened May 2019).

May 2019 marked the first time in South African history that every province had its own permanent provincial seat of the High Court. The number of positions available and seats filled therefore adjusted accordingly.

So, with all this enlargement how is the judiciary bearing up in the representative demographics department? The answer: not too bad!

The racial composition of the judiciary

In 2016, the racial composition of the judiciary could be broken down as follows:

In September 2020, the demographics have changed slightly to be:

Viewed in terms of gender vs race in September 2020:

Of the 19 top positions within the judiciary, 12 of these positions are held by African males (63,15%), two by African females (10,52%), three by Coloured males (15,79%), one Coloured female and one white male (5,26% respectively). On this list, we can add the specialised courts such as the Electoral Court, the Land Claims Court, the Competition Appeal Court and the Labour Court but the gender demographics do not look much better: An African male, an Indian female, a White male, and a Coloured male head up each of those courts respectively.

Section 174(2) of the Constitution requires that the judiciary broadly reflect the racial and gender composition of South Africa, and the Judicial Service Commission must consider this when appointing judges. All in all, the JSC’s commitment to this seems apparent. True transformation, however, goes beyond representation and must also include a deeper commitment to the values of the Constitution – and a few changes to the old guard.